Paine Edmonds - May 18, 2012
Congratulations to Abbotsford’s own Adam Hadwin, winner of the 2011 Paine Edmonds Vancouver Open, on his recently announced promotional partnership with Canucks Sports & Entertainment.
The Canucks and Hadwin announced on May 17, 2012 that they’ve entered into a promotional partnership in which Hadwin will support Canucks Sports & Entertainment’s charitable initiatives by participating in signature Canucks for Kids Fund events. In return, Hadwin will display the Canucks’ primary logo on his apparel while on tour and other sanctioned PGA events. 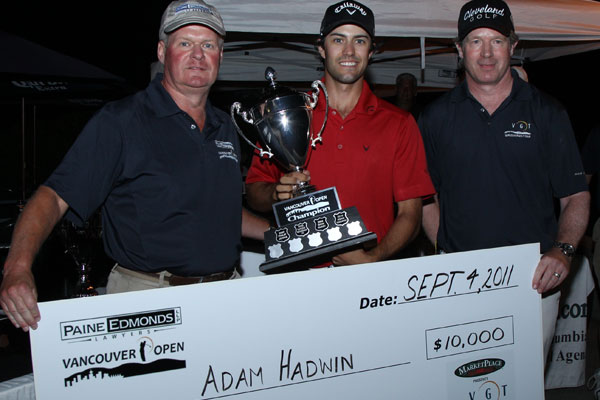 Brad Garside, Adam Hadwin, Fraser Mulholland
Under the direction of partner Brad Garside, Paine Edmonds LLP has been a strong supporter of the Vancouver Open and Vancouver Golf Tour and the development of local golf talent such as Hadwin as they not only become future stars, but also key contributors to the community as evidenced by Hadwin’s announced involvement with Canucks for Kids Fund
events.
Paine Edmonds LLP is also a proud supporter of Canuck Place Children’s Hospice, an important recipient of the Canucks for Kids Fund. Partner Ivar Lee is a Family Volunteer at Canuck Place and our staff proudly donates funds raised from its annual Christmas donation drive. To learn more about ways of donating to Canuck Place or volunteering opportunities, visit canuckplace.org.