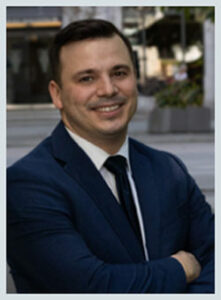 Casey began his legal career articling at a prominent criminal defence law firm in downtown Vancouver. He has practiced personal injury law since being called to the Bar in 2017. Casey has acted as both plaintiff’s counsel and defence counsel, offering a balanced perspective in the handling of personal injury claims. He has had trial experience in both the Provincial and Supreme Courts of British Columbia. Casey takes a reasonable approach to resolving claims while still preserving his clients’ best interests.

Memberships & Professional Affiliations Years of Call & Jurisdiction Called to the BC Bar in 2017
Education
Personal Notes Casey was born and raised in North Vancouver. As a law student, he volunteered at his university’s Legal Information Service Program, providing free legal information to the Kamloops community and students at Thompson Rivers University. In his free time, Casey enjoys cooking, traveling, spending time with his goldendoodle Benny, and losing at fantasy hockey.
Paine Edmonds LLP Lawyers