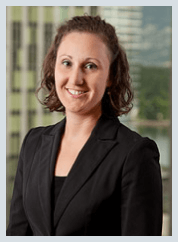 Kate joined Paine Edmonds LLP as an associate in 2006. She is a member of the firm’s ICBC & Personal Injury Law and Insurance Litigation Groups. She has appeared as counsel in hearings and trials in the Provincial Court and Supreme Court of British Columbia.

In June 2015, Kate and partner Brad Garside went to trial regarding our client’s claim for personal injuries arising from a Greyhound Bus accident that occurred in 2007 on the Trans-Canada Highway outside of Hope, BC.

The plaintiff was left with chronic pain as a result of the injuries he sustained as a passenger on the Greyhound bus. His ability to work was affected by his accident-related injuries. The Reasons for Judgment of Mr. Justice Silverman were released on November 24, 2015, wherein the Court awarded damages to our client as follows:

Full reasons for judgment can be found here.